I am not a fan of Country music, or at least that’s what I’ve been telling people my entire life. This past weekend I happened to come into possession of tickets to see Sugarland at the Santa Barbara Bowl in you guessed it, Santa Barbara.

First off, what to wear to your first country concert ever? I must admit, while there is an ounce of hillbilly in my blood, I’ve always dressed true to my city boy nature, so this is what I went with: 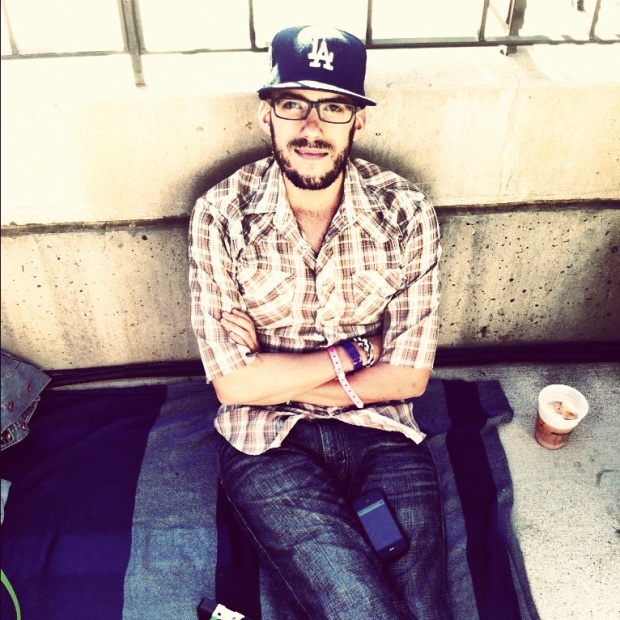 This is about as “Country” as I’ll go…

Dodgers hat from Lids (I got multiple compliments), a plaid western button down that I picked up from Crossroads and the most comfortable pair of denim I’ve ever owned thanks to Levi’s. Out of the picture are my Cole Haan “Gunnison” driving shoes. Yee haw.

Now the show…Sugarland was awesome. I can’t believe I just said that, or rather published that online. Please don’t tell anyone.

The energy was explosive. Great band, great songs. They played all of their fan favorites like Settlin’ and Stuck Like Glue, but for their first smash hit Baby Girl they brought up a 12 year old local girl to belt it out. I’ll give her credit, she was sweet and had fun with the lyrics.

Remember, this was all new to me. The guy half of the duo, Kristian Bush, had like like 25 different guitars. Jennifer Nettles, the lead vocalist, rapped Vanilla’s hit “Ice, Ice Baby.” She indeed  rocked the mic like a vandal, and made the stage light up and waxed them chumps like a candle.

My favorite part of the show though was their encore. As a planned surprise, and I’m going to age myself right here, Dave Stewart from Eurythmics came out and jammed as Jennifer channeled Annie Lennox for “Here Comes The Rain Again.” Dave’s sparkle-laden stage make-up was a little…interesting…but the his guitar licks were crackling with electricity.

The Bowl was small and intimate. It only packs about 4500 people looking off to the ocean. Way beautiful and acoustics that will satisfy audio snobs. The summer line-up isn’t really my normal scene, but I think the trip up the coast would be worth the drive.

Until next concert, rock on my friends!

This is about as “Country” as I’ll go…

A cool way to end the show.

Each piece that you choose for the day’s outfit should say something positive about you. These are your “Elements of Style.” Normally when I post daily style pics they’re more about the overall outfit and the setting (I love the backgrounds in my neighborhood!).

Today I wanted to focus more on the details and the way the textures I chose worked together. I have many colors in play, but I went with soft chinos for Friday and a heavy tweed blazer that is extremely tailored. These choices along with my prints and patterns obviously made me stand out from the crowd, but overall my elements of style formed a comfortable and complimentary look.

I’m wearing J.Crew chinos, Cole Haan shoes (the norm), a Ted Baker tie and a pocket square from the LA Fashion District, but my favorite piece is my John Varvatos eyewear. Black thick framed with silver tips…those are my daily element of style.

Today’s outfit inspiration is a little leftover from the Derby. What do you think? I love the alleyway behind my place. Plenty of great backgrounds for photoshoots in my neighborhood.

Where to get my prepster gear:

Garden Fashion. Today’s outfit was inspired by the plaid prepsters of the 80s.

I’m rocking a Tommy Hilfiger oxford shirt, a brown knit tie by…I have no idea cause I lost the tag, and plaid Express pants.

Last year I started getting a bit restless.

Guys, for the most part, aren’t as gung-ho about shopping excursions as our better halves are, especially in the clothing department. Surprisingly, I’m no different. Those who know me well know that my style hasn’t changed too much over the last few years.

My sense of fashion had plateaued.

As an office dweller I’ve been used to European-cut suits since the day I graduated from college. For the last seven years I’ve been wearing two-button two-and-three piece suits. And they’ve been awesome. Simple and classic. Those to adjectives have been my mantra.

Last year though…I started to get an itch. I was bored. Bored with a lot of things, but especially my wardrobe. Then someone introduced me to The Preppy Handbook.

That book, coupled with an uber-prep outfit I saw in a GQ magazine seriously changed my life. Mind you, this was on my trip over to the Middle East for two weeks, so I had plenty of time to ponder the next stage of my style evolution.

Red pants. GTFO. What a-holes wear red pants? Well, preps wear red chinos. And green chinos. And assorted other things with anchors and lobsters and whales on them.

Well, maybe I’ve got the bloodies down.

The transformation to American Prep is going to be a rough one, but I’m determined.

*the first being, I Hope They Serve Beer in Hell.

Another amazing week on the Left Coast. Temperatures weren’t too hot and not quite too cold. Ever since I started LCF I found that I’ve been having a lot more fun with life up in Los Angeles. I started taking the metro to work and checking out more places around my neighborhood I think in response to creating content for the site.

Anyway, thanks for following along. Maybe one day we’ll see where this all goes.

and the Question of the Week was, ““What animal would you NOT want to be reincarnated as?”

Cole Haan, my tried and true favorite shoe company, “launched” their newest wingtip incarnations today, the LunarGrand. I received the announcement this morning stating that, “The innovative LunarGrand is designed to conquer New York City’s streets in style.”

Wrong. These shoes were designed to aggrevate anyone with real style and sensibility, in New York or otherwise.

I remember Esquire boasting a preview of these back in February and my sentiment hasn’t changed. In fact this was my exact comment:

“Decidedly not feeling these…too much business mixed with pleasure. I would call these the mullets of dress shoes.”

That garnered a couple likes, followed by the plethora of responses such as…

“Can’t see many adults in these, but my 11-year-old thought they were the bomb. Gotta think these would be a hit as $65 kids shoes.”

Someone put too much Nike in the sauce.

Is it because I’m turning 30 this year? Is my repulsion from these “future classics” a sign of fuddy-duddiness? What do you think?

Click the silly image up top for the original Esquire preview article.

Where to wear: Not around me.

Error: Twitter did not respond. Please wait a few minutes and refresh this page.